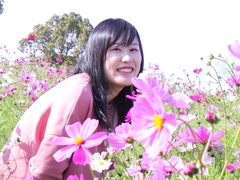 What is the genetic change that made owl monkeys nocturnal?

All genera of simian primates (which include macaques, gibbons, chimpanzees, humans, etc.) are diurnal—meaning that they are active during the day—with one exception: the genus Aotus (owl monkeys). Aotus  underwent a shift from a diurnal to nocturnal lifestyle after it split from its closest relatives, the marmosets. The light-capturing cells (called photoreceptors) in the eyes of owl monkeys contain a structure known as the microlens. This microlens gives them a night vision that is superior to those of other simian primates.

The microlens is a block of condensed DNA and proteins, and it is located at the center of the nucleus in the light-capturing cells. In other types of cells, similar blocks are located in peripheral regions of the nucleus. All nocturnal mammals, not just night monkeys, have this lens in their photoreceptor nucleus.

To explain this phenomenon, I hypothesized as follows: Mammals originally had a molecular “switch” that could change the location of the DNA–protein blocks in the cells. In most cells, it is normally turned on and maintains the peripheral locations of the blocks, but owl monkeys turned it off, so they acquired the microlens in their photoreceptor nucleus.

If this hypothesis is correct, what acts as the switch? My goal is to find this switch in the genome of owl monkeys.

Although there are a lot of nocturnal species of prosimian monkeys, they adopted nocturnal lifestyles long before owl monkeys. Thus, it is difficult to identify the key mutations in them that caused the construction of microlens in their photoreceptors, because their genomes have accumulated a lot of unrelated mutations. I think that the owl monkey genome is the most useful material for finding a key mutation, and my research is important to uncovering the mystery of night vision in nocturnal mammals.

Because some proteins, including LBR and Lamin A/C, are known to tether the DNA–protein blocks to peripheral regions of the nucleus, I suspect that a mutation occurred in the genes that code for these proteins in the phtoreceptors of owl monkeys.

I am performing bioinformatic analysis of the owl monkey genome to clarify what changes occurred in these genes. Using human LBR and Lamin A/C genes as queries, I am conducting database searches against several primate genomes to compare DNA sequences across species. If a mutation that is specific to owl monkeys is found in these genes, it is likely to be a candidate for the molecular switch that gave them a nocturnal vision.